Is This The Stock Market Bottom for Marijuana Stocks?

For the last few months, marijuana companies and marijuana stocks have been racing to the bottom. Is it time to go bottom-fishing and pick up fabulous potential gains for pennies? Here’s my (MaryJane Farmer’s) take on what to do with the cannabis stocks you might own or might think of owning.

Marijuana boom times were coming, according to the industry and the stock whizzes selling the hype.  And yes, there were some initial big winners–coming out of the gate, most of the cannabizness stocks shot up spectacularly.  But since then, a little less than two years ago, the same stocks have mostly fallen below their early prices and hardly any have justified the expectations that pumped them up in the first place.

At this point, CEO’s of big publicly traded companies are leaving their jobs (or being pushed out?). Some of the companies don’t have the cash to pay their bills and are trying to persuade their suppliers that stock options are better than cash (MedMen is doing this.  Few of these companies are finding takers for their offers.

Meanwhile, cannabis businesses large and small are complaining about the lack of enforcement that allows unlicensed sellers and growers to undercut the prices of the licensed outfits.  At the same time, the licensed growers are complaining (and rightly so) that licensing costs, taxes and regulatory requirements are too burdensome to continue in business.  Amid the confusing conflict of state laws, municipal regulations and federal drug cops, there is only one sure thing–lawyers and accountants will make a lot of money putting people into the cannabizness.

Of course, the stock market touts are benefitting from the confusion, claiming to know about “a little-known Canadian company” that  “could be the key to profiting off the coming marijuana boom.” (quoting The Motley Fool.) Then there’s the “world’s largest marijuana greenhouse” whose stock you can buy for pennies (supposedly near Cleveland — near Cleveland as in across Lake Erie in Canada.)

What To Do Now

Here is my advice:  if you own stock in any company that has lost its CEO or is unable to partner with another big player outside of the cannabis industry, sell that stock and take your loss.  At this point, it is unlikely to substantially improve and the risk of further failure and further price decline is significantly higher than the possibility of improvement.  Sure, you can wait for lightning to strike like it did in mid-January 2020, but lightning rarely strikes twice in the same place. And it strikes quickly and is gone just as quickly, usually leaving the dead and wounded behind.  The same thing happens with volatile cannabizness stocks–big jump and bigger declines are common and unpredictable.

Make a Million in the Market

What if you are just itching to buy marijuana stocks.  Well, first of all, if you MUST have marijuana, then your best bet is always to grow your own.  (Here’s how if you don’t already know.) . You probably won’t get rich, but you also won’t get poorer.  Remember, the only sure way to make a million dollars in the stock market is to start with two million.

Moving on to the stock market and the main question: should you buy now?  First of all, this is probably not the bottom.  There are likely to be a few major ‘restructurings’ which is stock market talk for bankruptcies when the bankruptcy courts can’t help. Second, picking a winner out of all the noise and hype requires an expert’s insight.  Third, what’s your hurry?  If it’s cheap now, it will probably be cheaper later.  Fourthly, predicting the bottom is always wrong.  But identifying a trend up, as opposed to a trend down, is possible. Buying after a trend starts usually beats trying to guess when it will start.  From time to time, look at the trend on the North American Marijuana Index chart of daily values for one year.

So instead of buying one or a few cannabizness stocks,  take a look at ETF’s (exchange traded funds) that concentrate on marijuana stocks.  These funds don’t perform any worse than single marijuana stocks, and they reduce the risk of investing all your eggs in one bad basket.  You will have decent exposure to the potential marijuana market upside and you will have some protection afforded by investing with alleged professionals.

Finally, an excellent resource to follow (despite earlier warnings about ‘touts’) is The Motley Fool’s marijuana page.  You can at least learn what to definitely avoid and what to possibly consider as you wait for the bottom to eventually appear and the marijuana market to turn up. 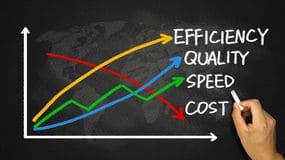