Skip to content
Home » Articles » News » Is This a Joke?

When I read the news, I was sure it must have been a joke? Willie Nelson?? Really?? They guy who was busted with a touring bus full of weed? The guy who inspired a song about why you never want to smoke Willie’s potent weed? 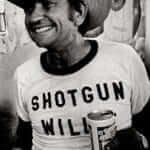 But there it is — Willie Nelson is not smoking weed from now on.  Wow.  Probably going to knock down the price of weed for a long time.  What’s next?? Is Willie going to clone his favorite strain and market it?  Willie’s Weed.  It will sell like – well, like weed at a Willie Nelson concert.  I mean, if Hunter Thompson’s widow can clone The Gonzo Journalist’s weed, then surely  can sell his clones too.