Skip to content
Home » Articles » News » Weed is not “Green”

Marijuana plants may be green in color but are definitely not “green” in terms of greenhouse gas emissions!  The reason, once again, is down to cannabis being illegal at Federal Level which places restrictions on how and where cannabis can be grown.

Marijuana is not nicknamed “weed” without good reason. It is in reality a weed and will grow very successfully outdoors provided the climactic conditions are right. The southern states of the US, with warm temperatures and plenty of sunlight, would provide the ideal location for large-scale outdoor cultivation but there is one major stumbling block.  Federal law means that it is illegal for growers to transport their products from one state to another.  Those states that have legalized cannabis require that cannabis sold in the state where it’s legal must be grown in that state.

As a result, and as more states legalize cannabis, those where growing outside is not a practical option are increasingly turning to large-scale indoor cultivation in order to meet the demand.

Indoor cultivation demands the creation of climate and conditions that mimic outdoor conditions in which the plant can thrive.  That means lighting for many hours to compensate for the lack of sunlight, fans to keep the air moving, extractors, and a whole range of equipment to manage temperature and humidity.  All of these use large quantities of electricity and create a carbon footprint, although in fairness it will vary from state to state. 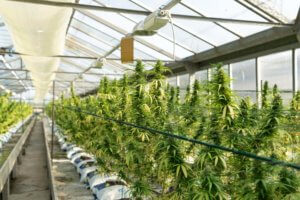 There are other factors as well.  Some indoor growers are now introducing carbon dioxide into the growing area either by putting in bottled CO2 or burning natural gas on-site to basically get CO2 in the room. Adding CO2 increases the rate of photosynthesis and makes plants grow bigger and faster, so you get more flower faster.  However, this increases the quantity of emissions not only by the amount caused by bottling CO2 and transporting it but also by any unused CO2 that may be vented out of the facility into the atmosphere.  And, of course, CO2 is one of the greenhouse gases the world is looking to reduce substantially to minimize the effect of climate change.

There is also another misnomer that the industry needs to address and that is the misconception that marijuana grown outdoors is less potent than that produced indoors. This results in the outdoor-grown product being treated as “second rate” and downgraded.

What is needed to address this problem is a major change in the classification at the Federal level but, despite having a majority in both the House and Senate, and a Democrat President in the White House little has happened to further the legislative proposals that have been passed by the Democrat-led House. Indeed, all indications coming from the White House appear to indicate there is little to no support from the President for legalization and that even decriminalization is by no means a top priority.  But this is a topic for a different and wider-ranging article!