Will #trumpolini mess with MaryJane?

On the surface, a growing number of threats to crack down on legal state marijuana industries by the Trump administration looks worrying.

Dig a little deeper though and the answer isn’t so simple.

Since states started allowing medical marijuana, a large scale industry has emerged and Trump’s hands may be too small to stuff the $25 billion genie back into the bottle… 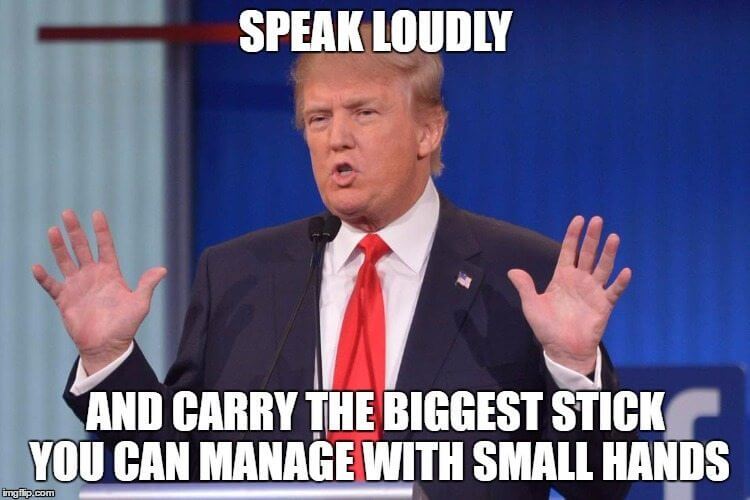 Threats from the Department of Justice

On September 20, Attorney General Jeff Sessions said to a press conference in San Diego, “It doesn’t strike me that the country would be better if it’s being sold at every street corner.”

UPDATE Sep. 2019: Of course Sessions is gone now, thanks to his inability to lick #trumpolini’s whatever sufficiently sloppily.  The current lapdog, Attorney General Bill Barrf, has not made marijuana a priority, since his priority is defending the pretend throne upon which #trumpolini rests his giant and extremely fragile ego.

Just the week before, his deputy Rod Rosenstein said somewhat alarmingly, “I think there is some pretty significant evidence that marijuana turns out to be more harmful than a lot of people anticipated, and it’s more difficult to regulate than I think was contemplated ideally by some of those states.”

The Department of Justice had been doing its own research—did they know something that the industry hadn’t seen?

In April Sessions asked a panel of experts to dig some dirt on marijuana legalization.

According to an Associated Press article in August (whose journalists had seen the report), the “Task Force on Crime Reduction and Public Safety, a group of prosecutors and federal law enforcement officials, has come up with no new policy recommendations to advance the attorney general’s aggressively anti-marijuana views.”

Given that there is no evidence of additional harm caused by states’ legalisation programs, this gave industry observers the idea that the Trump administration might be going down the same road it has with climate change and has started to believe its own not-so-true ‘truths’.

The Federal position on marijuana

The current Federal government’s position on legal medical marijuana is not to interfere with state policy.

This is broadly in line with the intention of the US Constitution where there are tensions between different levels of government written in so that there is no concentration of power in too few hands (whatever their size).

Essentially if state governments decide that national policy is wrong, they have some rights to go their own way.

While ignoring Federal law and passing their own laws that run contrary with the overriding law of the country wasn’t specifically envisaged, the concept is still in the spirit of the Constitution.

In 2013 the Obama administration published the ‘Cole Memo‘ that said,

the Department expects these states to establish strict regulatory schemes that protect the eight federal interests identified in the Department’s guidance. These schemes must be tough in practice, not just on paper, and include strong, state-based enforcement efforts, backed by adequate funding. Based on assurances that those states will impose an appropriately strict regulatory system, the Department has informed the governors of both states that it is deferring its right to challenge their legalization laws at this time.

It seems that the Task Force on Crime Reduction and Public Safety was told by Sessions to find breaches of the Cole Memo and thereby enable him to crack down on legal weed.

The Cole Memo was effective and the states agreed to follow it.

Just under 1% of the US population has an opioid addiction.  An investigation published in the Harvard Law and Policy Review stated,

The American Society of Addiction of Medicine estimates that over 2.5 million Americans now have an opioid use disorder. In 2015, 33,092 Americans died from an opioid-related overdose, a four-fold increase from 1999.

In September 2016, President Obama called for Congress to give $1.1 billion in funding to tackle what has become one of the worst drug crises the US has ever faced. The 21st Century Cures Act that was signed into law in December that year gave states money for primary and secondary prevention measures until 2018.

This may well be a drop in the ocean in the face of pharmaceutical companies getting people hooked almost daily—300 million opiate prescriptions were issued by doctors, more than one for every US citizen, in 2015.

Speaking to one industry insider who did not want to be named (a successful marijuana businessman currently based in Oregon but who had been working in the legal industry for more than a decade) we were told,

The US marijuana industry is worth $25 billion and would be almost impossible to stop now. Besides, there is an epidemic of heroin users and the Feds are overwhelmed in tackling that. How could they fight the cannabis industry when they can’t stop heroin?

There is growing evidence that marijuana use can help with opiate addiction.

An article published on Medium.com shows a situation where those with access to marijuana in their states use opiates far less:

For those looking at available science, as opposed to evidence that what they believe is true, marijuana may well be one of the solutions to the opiate addiction epidemic.

Cracking down on marijuana would require many billions of dollars more and may actually compound the opiate problem by restricting access to a far more benign pain treatment.

Presidents with a deft diplomatic hand have the ability to make a real difference, even when they have a Congress that is ideologically opposed to them.

On the surface, Trump should be able to get any policy he wants through Congress as the GOP has a majority in both Houses…

However, Trump has got zero legislation through Congress of any kind since he took office.

Another problem for Trump: Congress has the power over the US government purse—not the President.

Given the DEA’s main priority is interdiction of the opiate problem, Congress would have to throw billions of dollars more at the organization to give it the resources to tackle a well established legal marijuana industry on top of the opiate crisis.

There are no signs that this would be possible—even if Trump did have the first idea how to get even a flagship election policy such as repealing the Affordable Care Act through using his ideological friends.

There is legislation passing through Congress that would amongst other things, stop the Feds from meddling with medical marijuana laws. This won’t pass either as there are too many opponents to legalization in Congress.

So it seems that for now, nothing can change existing policy for the good or bad—an incompetent President and a divided Congress can’t work together.

And with some research suggesting that up to 57% of Americans support legalization of some kind, it could cost even marijuana opponents their seats should they support any robust attack on the industry.

[EDITOR’S NOTE: The absurd clash between state and Federal laws on cannabis legality creates all manner of logic-defying anomalies and Catch-22s for everyone involved. For more on this genuine reefer madness, check out this segment on marijuana laws from John Oliver’s Last Week Tonight show back in April.]