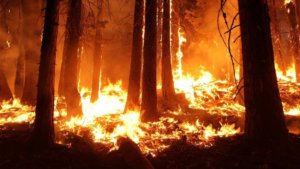 As if 2020 had not already brought enough problems with the Covid-19 Virus the out of control wildfires in California are a major threat to many marijuana growers. Outdoor growers in Northern California are reporting huge damage to their crops which are close to the flowering stage as summer enters its final stages.

One farm, in Sonoma County, reportedly lost about four-fifths of its marijuana crop to the fire on Wednesday but fortunately, firefighters were able to save part of their family compound.

As with many outside growers, their crop was not insured so they will have to carry the loss themselves.  The other concern is that the remaining portion of the crop may have sustained smoke damage.  If the bud has set enough, it’ll just be smoky marijuana which will leave the crop flavoured with smoke that nobody will want.

To the south of San Francisco, in Santa Cruz County a similar situation exists, although as some growers were forced to evacuate as the fires increased in strength, many will not know the fate of their crop or their homes until they are allowed to return after the fire has passed or been brought under control.

Even areas as yet not on fire are concerned about the damage resulting from the smoke. As another grower commented we may not lose the crop to the flames but the smoke affects the buds and leaves an unpleasant flavour to the flowers which means much of a crop can be worthless even if it has not burnt.

The wildfires have now burned through more than a million acres, and more than 14,000 firefighters have been scrambling to protect communities from two dozen major blazes forcing more than 100,000 people from their homes.

Many of the hundreds of wildfires burning across the state having been sparked by lightning strikes, and there were fears that a new round of dry lightning storms on Sunday 23rd  and Monday 24th would make matters worse. But the lighting strikes so far have not been widespread, and moisture has helped to diminish some of the fires.

On Monday morning, the largest, the L.N.U. complex, which stretches across Napa and surrounding counties, was 22 per cent contained. Shana Jones, the chief for Cal Fire’s Sonoma-Lake-Napa unit, said at a news conference.  But there is still a long way to go and a lot of work required to fully contain the blazes.

Marijuana growers will be hoping for the weather to continue to help firefighters contain the fires and enable them to return to their farms with as little damage as possible.