Cannabis smoking for the benefits, or effects, of its hallucinatory properties may well have been around for a considerably longer time than had previously been thought.

The history of cannabis or marijuana as a domesticated plant can be dated back as far as 3,500BC in east Asia, but it was then grown for its oily seeds and its long, durable fibers. Similar to modern hemp, the earliest domesticated varieties didn’t produce much of the psychoactive compound called THC.

Although cannabis has been found at other locations, from Western China to the Altai Mountains in Siberia, archaeologists have never before found evidence that ancient people were smoking it or using it for its mind altering effects.

But now there is every indication that cannabis seeds were being “smoked” as long ago as 2,500BC. Not in the format used today in bongs, vapes or rolled like cigarettes but burnt over a fire in an enclosed area where the smoke arising from the fire could be inhaled.

Discovered in tombs in Western China, dating back 2,500 years, were burned stones and the interior of wooden bowls that also looked charred. To discover what use these artifacts had they were subjected to gas chromatography/mass spectrometry to analyze small samples and residues.

University of Chinese Academy of Sciences archaeologist Yemin Yang and his colleagues found the chemical called cannabinol, or CBN, which is the unmistakable chemical signature of cannabis. 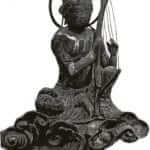 Discovered at the same place was the remains of a musical instrument called an angular harp, which played an important role in funeral rites in Western China. Here is a video with angular harp music.  Definitely hallucinogenic.  Finding the two artifacts together readily begins to portray a picture of mourners gathering for the funeral of a loved one and, in a similar fashion to a modern wake, adjourning to a tent-like structure to listen to music and relieve their sadness by inhaling the hallucinogen smoke.

Although this discovery does help to provide some datable evidence of the use of cannabis for its psychoactive effects it still does not answer when this may have first begun or indeed if the plants from which the seeds were obtained were cultivated or growing wild.

The chemical analysis from the tombs indicated that the seeds had a high concentration of THC. It is now known that modern wild cannabis plants produce higher levels of THC when grown at  lower temperatures and exposed to higher levels of ultraviolet light, all of which are more likely to be found at high altitudes.  Even though MaryJane Farmer already told you that ultraviolet (blue spectrum) light gives better buds with more resin (the stuff that has the THC), it is highly unlikely that ancient Chinese used the power of LED Grow Lights. 😉 . Still, we can learn a lesson from these long-ago pot farmers–more ultraviolet spectrum and lower temperatures help grow better weed.  These conditions are exactly what LED Grow Lights provide.

Whether these particular strains and the effect they could provide, were found by luck and potentially then cultivated we may never know but all the evidence seems to indicate that by 2,500 years ago, people were smoking cannabis as a ritual drug in Western China.

That may also provide a clue as to how or why cannabis found its way from China to the rest of Europe and the Middle East. The Pamir Mountains of Western China are alongside the ancient network of trade routes known as the Silk Road. Spices, herbs and plants were all major commodities traded along this route and in many cases influenced the way food was prepared in western and mid-eastern kitchens. With this new discovery it is almost certain that cannabis joined the list of products traded and exported to the rest of the world along the Silk Road. (No, not the Silk Road that was busted in 2013.  We are talking the original Silk Road.)

Check back often for reviews of the best products for enjoying marijuana to the maximum. Check out our home page for LED Grow Lights if you’re a grower.  If you are new to growing, get our free Beginner’s Guide here. And if you have some great photos of your garden, pop them into the electric post office and send them to me: MaryJane@420Beginner.com.